The McDonalds Monopoly game is back! Time to fatten up on crappy burgers, cold french fries, and …… look at probability distributions? 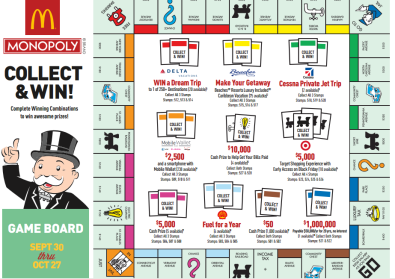 Not much time to chat today, as we have a quiz during class. But many students picked up on the fact that McDonalds probably prints a small number of certain, coveted, properties and large numbers of the rest.  This is confirmed by an article on the math behind the McDonalds promotion.

You’ll find many folks online offering to trade game pieces, hoping to locate folks who have the pieces they covet, or to sell their pieces to the highest bidder.  This led to an interesting debate:

If I have Park Place, and you have Boardwalk, should we combine our pieces and split the million dollars?

In my morning class, the vibe was largely pro-sharing, until a few vocal students argued that having Boardwalk was such a huge advantage, we could just go out and buy french fries until Park Place was found. In the end, the class understood the value of these rare pieces, though the discussions and debates were rich.

Now turn your desks and get ready for the quiz!