Getting close to the end of the semester here, with just a few days remaining before final exams. In Algebra 2, one of the last units of the course is on parametric equations. With changes to our HS courses, and having not taught Algebra 2 for many years, I have never taught parametrics before. But a new unit to me became fun and hopefully relevant to my students through technology and some great class discussions.

In this short unit, my ultimate goal was to expose students to projectile motion expressed parametrically.  This was a contrast to material learned earlier in the semester, where quadratics are often used to model motion and explore max/min of projectiles.  Now we had the ability to think about how the horizontal and vertical position of an object were both dependent on the time.  After a quick trig review, we used these equations for our projectile problems.

I wanted a culmuniating assignment for this unit which would allow students to work collaboratively, and demonstrate their comfort with utilizing the parametric equations.  To start the day, teams had netbook computers to use, and I showed the following video to start discussion:

After a brief discussion about football and the uniqueness of the Cowboys Stadium scoreboard, I told they class they had two questions to answer:

I did have to stop class at one point to explain that a good angle for hitting the scoreboard may NOT be ideal for hitting a punt as long as possible; the two questions I am asking are separate from each other.  I was happy with my students’ arguments and hope to do this activity again.  Below, one group turned in most of their work in a Desmos file, which shows an “average” punt, a punt which would hit the scoreboard, and an “ideal” punt for distance.  Click below to open the graph. 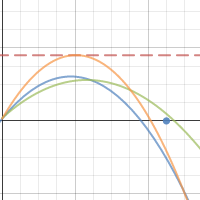 HOW THE UNIT STARTED

Desmos was also used to start the unit, and allow students to see how parametrics behave.  With netbooks, partners opened the Desmos file below, and were given the instructions: 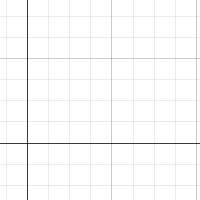 Thanks to the Desmos folks for adding the path trails to the file.  Cool addition.  Many students were able to desribe the paths they observed, often writing a rectangular equation to describe, but could not quite explain the motion.  Some student paraphrasing:

I think it is an equation, and the slider somehow controls the domain.

Note, this falls apart some when we get to example 4, the circle.

I think the slider controls the value of x, and this controls y.

I think the slider somehow controls x and y.

Now we are there.  A parameter, here “a”, controls the values of both x and y.  After discussion, students opened the folders and observed the structure and behavior of the equations.  This opener made the “buy-in” for the need for parametrics so much stronger, and I hope to use this again!

You can find more Desmos class files in my Desmos Virtual Filing Cabinet!

One reply on “Parametric Equations, Desmos and Cowboys Stadium”

[…] It’s almost the end of the semester, and finals are looming on the horizon, when Bob and his students confront a totally new topic: parametric equations. Find out what happens next in Parametric Equations, Desmos and Cowboys Stadium. […]