Here’s the picture which greeted students as they enetered today:

Those are all odd numbers.

Why are they purple?

What’s with the dollar signs?

They are prime numbers.

Are they all prime? How can we tell? Many students remembered the “trick” for determining if a number is a multiple of 3, but how do we check 8191?  Maybe 13 or 17 goes into it, or some other funky prime.

But once we establish they are prime, what’s special about THESE primes. I let this sequence marinate for a bit as I continued instruction, and eventually offered a hint.

Add 1 to each number in the sequence.

This led to a clear observation in one class, and one I didn’t expect in another:

They are powers of 2

They are numbers from the 2048 game

So true! But what is special about these powers of 2, and why did I exclude others?

The big reveal here is that the numbers shown at the start are Mersenne Primes: primes of the form shown on the right, where P is also prime.  And the Great Internet Mersenne Prime Search provides an opportunity for the amateur mathematician to participate in a quest to find bigger and bigger Mersenne Primes, and perhaps score a cash prize for your effort! Visit the GIMPS site for more information about the search, and the current status of the project, where the largest prime found boast over 17 million digits. While many in the class wondered why anyone would care about such primes (we will discuss codebreaking later our course when dealing with Matrices), others seemed intrigued by the pattern. And as we begin to discuss counting priniciples and large numbers tomorrow, this was a neat way to foreshadow.  Finally, I want to live someplace which values math so much that they put math on their postage, that would be cool…. 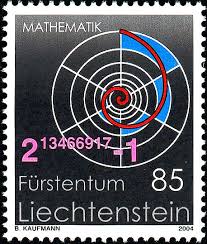