During yesterday’s group work, which included a discussion of Pascal’s Triangle, I overheard some groups mention Sierpinski’s Triangle, which they had seen some in Geometry last year. That led to today’s opener, an applet from the awesomely mathy site Cut The Knot: 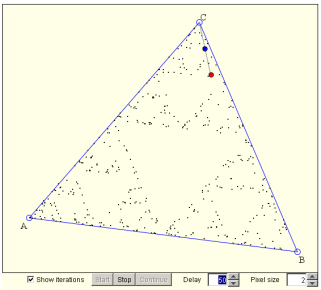 In the “Chaos Game” a point be-bops about a triangle under specific rules:

At first, I have the applet run slowly, and students don’t quite absorb what is happening. But as we speed up the animation, something interesting develops…. 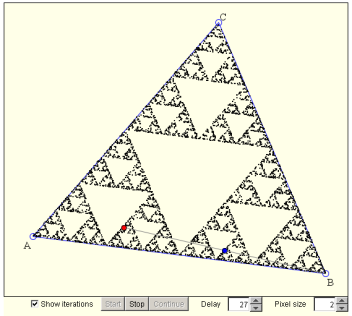 Our old friend, Sierpinski’s Triangle! Later in the period we saw this famous structure again when discussing Pascal’s Triangle and factors. Check out this cool coloring remainders applet and have fun!

[…] last week’s experience with Sierpinski’s Triangle, I was eager to see other math landmarks my students had […]