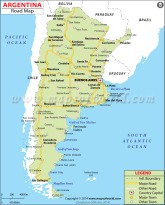 A map of Argentina….a class of impressionable 9th graders…and a devious teacher….what could go wrong? I’m currently reviewing past statistical ideas with my 9th graders, with an eye towards standard deviation, the normal curve and sampling.  To generate some data, I asked each of my classes 2 questions about the country of Argentina:

Both classes gave me strange looks.  But with instructions to answer as best they could, the students played along and provided data.  Did you note the subtle differences between the two question sets?  The two classes provide striking different estimates, due to the anchoring from the first question.

The inspiration for this activity comes from the book A Mathematician Reads the Newspaper by John Allen Paulos, which contains many other quick nuggets to use in your classroom.  And now we have a rich conversation regarding the wording of poll questions to enjoy in the next few days!