Sometimes class openers have nothing at all to do what is happening in class, and are meant to generate positive math vibes, or think about ideas beyond the confines of curriculum. Today my classes celebrated the 100th birthday of Martin Gardner, the long-time master of the math challenge. His birthday would have actually been last month, but better late than never to enjoy some math puzzlers, these from a 2011 edition of Scientific American, where his problems were often published.  Many similar problems appear online, and can be easily found through searches. 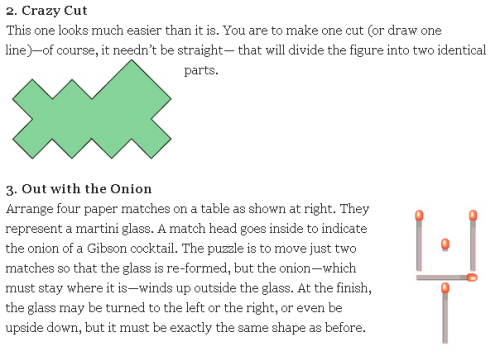 The “crazy cut” problem proved difficult for students, though eventually a few students found the answer, which was shared under the document camera.  Click the Scientific American link above for the solution.

The Martini Glass problem was solved quickly, and modeled on the board by a number of students using strips of paper and magnets.  I’m hoping that enough students were intrigued by the puzzles to look up more great Garnder puzzles on their own!