Many of my friends and followers have caught onto one of my guilty pleasures: my wierd fascination with The Price is Right (read about Price is Right and counting principles in this old post).  Here’s how a pricing game made for a fun review activity, and also made my life flash before my eyes (read to the end for that).

Here in Pennsylvania, we use the PA Core Standards.  For Algebra 1, here is a standard under “Anchor 1”:

A1.1.1.1.1 Compare and/or order any real numbers.  Note: Rational and irrational may be mixed.

Exciting….now let me go over here and watch the paint dry….

But during the NCTM conference, a lightning bolt hit. I was checking out a putting game at one of the booths, and I suppose rational numbers were on my brain….Hey – Golf + ordering rationals = feels like Hole in One to me!

In the Price is Right Hole in One game, contestants place groceries in order from least to greatest by price.  The number of items they can order until they are incorrect determines where they putt from. After a quick trip to the sporting goods store to find a putting cup, and some time with a Google Doc, we’re all set!

To start, I created a Google Slides presentation with 6 games.  Each game has 6 numbers for students to put in order:

During the game, all students in the class had about 2 minutes to place the numbers in order.  They, we randomly drew our “contestant”, who came to the board to fill in the 6 boxes on the board. 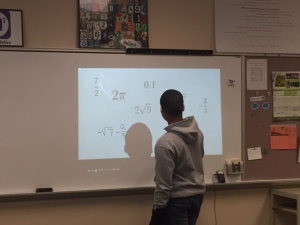 Next, we went through the numbers from left to right, and determined how far the contestant had gone in successful ordering. 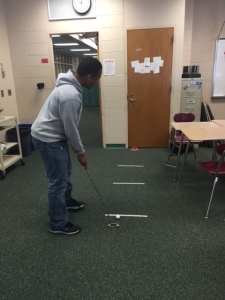 On the floor, 6 lines were taped.  Line 1 was on the other side of the room, and the lines were closer and closer to the hole. If a student had 4 numbers correctly ordered, they were allowed to putt from line 4.  Two students were able to order all of the numbers and tried their putt from about 2 feet away.

Those who made their putts earned candy to share with their group.  In about 20 minutes, we got through 4 games – not bad for ending a Friday on a fun note.

But be careful! My last “contestant” – one of my less cooperative students and a sometimes hot-head – was able to putt from line 6 with the help of his group.  After missing the first putt, I reminded him that the game is really Hole in One – OR TWO, and had a second chance. Lining up the putt…he took it easy…and missed again.  This is when he raised the putter up and, for a brief second, it looked like the putter could end up flying in my direction.

“Sean, just pick up the ball and put it in the hole….here’s some candy…”