An early morning post from Nik_D from the UK led to sharing class activities for linear programming, and provided a great example for me to share with colleagues on the value of twitter:

@nik_d_maths @fawnpnguyen Like to give Ss sticky dots for this and cards with "random" pts. Need big newspaper print axes. (1)

The activity on Fawn’s blog invites students to build Lego furniture and find the combination which will maximize profit.  I love the idea of handing students baggies with the “supplies” and having students build the chairs and tables.  But, without having Legos around, both Nik and I sought a way to approach these linear programming problems with a different hands-on approach.  In previous years, I had used sticky dots to help students visualize constraints and a fesible region.  Nik posted about his experiences last week, and now I am happy to share the U.S. point of view

Here, I worked with a freshman-year teacher who was eager to try something different to open linear programming.  As students wandered into class, they were given the initial problem.  The Powerpoint slides are available for you to use.

The class worked in teams to consider the problem.  Many start off by making data tables of the possibilities.

As the teacher and I circulated the room, we found that eventually, students consider algebraic models.

There was agreement on solution: 2 chairs and 2 tables are ideal.  The teacher asked students to share their ideas, which were written on the board, and led to new vocabulary: constraints, profit function.  We’re now ready to tackle our next challenge:

Many groans were heard, as students understood that “guess and check” would no longer be a great idea.  Note that the chair design also changes, which a student cleverly noted was from the “Game of Thrones” collection.

First, the class agreed on the constraints:

Then, for this part of the activity, the class is split into two groups, one for each constraint, which both the lead teacher and I worked with to explain the guidelines.  A spreadsheet with 50 identical “strategically selected” points were given to both groups, along with a pack of stickers.  The group task: test each of the points for their given constraint, and place a sticker on the wall if it satisfies the constraint.  The “small block constraint” group was given blue dots, while the “large block constraint” group had red dots.  After a few moments of organizational chaos, leaders emerged, and points were distributed nicely to the team.  Soon, dots made their way to the board.

After both groups were satisfied with their work, the teacher (Joe, below) discussed the dot patterns.  Where do the dots share space?  Where are there only reds, blues?  What parts of their graph are most important for this problem?  Then, I grabbed Nik_D’s idea by turning on the Desmos calculator and super-imposing  the inequalities onto the graph.  There was some prep work needed here, as Joe and I made sure the grid paper was placed nicely on his SMART board.  Also, please note that I seem to suck at taking clear pictures….it’s a probem.

One thing we would do differently here is letting students see the inequalities.  We hid them, so as to maximize screen space.  This would allow the teacher to turn the inequalities on or off, and emphasize where the colored dots reside.

The class discussion continued with an argument of how to identify the “maximizing” point, and the corner-point principle.

One last thought here.  The power of Desmos is evident for linear programming problems.  The teachers I work with agree that having students graph these sorts of problems by hand is not only time-consuming, it is silly.  By letting students experience the Desmos calculator, not only can we have real discussions of problems, we can tackle problems which may not be so graph-friendly.

Thanks to Nik D. and Fawn for the sharing!

In most Algebra 1 courses, the topic of Absolute Value inequalities comes at the end of a longer unit on inequalities.  We shade our number lines, attend to our open or closed circles, and start to hit the wall a bit with the routine.  So, as we begin to think about introducing absolute values, let’s get our students up and moving.  Here’s how:

Print out or scribble out cards with the integers -12 to +12, or use my handy integer card set.  This will give 25 cards, and you can adjust the cards based on the size of your class.  Give each student, except 1, an integer card.  The student who does not get a card will act as the observer during the activity, and will verify the class’ actions.

In a hallway, or outside on a nice day, have students sit in order from lowest to highest.  The students are making a human number line.  It is important that their card be clearly visible at all times.   The class observer should verify that all students are seated in order, with somewhat equal space between them.

With students seated, the teacher holds up an inequality.  Any student holding an integer which is a solution to the inequality will stand, thus making a human solution set.  The job of the observer is to verify the correctness of his class-mates solution.  My inequality cards file starts with two warm-up problems, to make sure the instructions are understood, before we start to head into the absolute value inequalities.

After we have developed some ideas about absolute value inequalities and their solution sets, it’s time to start formalizing our thoughts.  If you need more hands-on practice, click on the graph link below to try a Desmos demonstration with sliders. 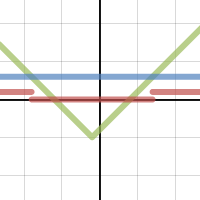 Compare the absolute value function (in blue), to the constant function (in green).  The comparison (in red) allows us to look at make greater/less-comparisons.

Let me hear about your Human Number Line experiences!