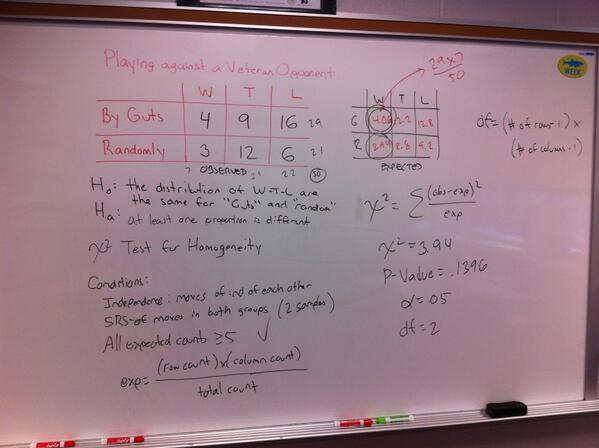 Bob,
I completed the Chi Square worksheet on the RPS and it worked out well. My class was a little further along when I introduced the activity. They had been exposed to both homogeneity and independence, but just before Spring Break. So on the second day back (nothing really gets done well on the first day back), I introduced the activity. As I expected, it really teased out the issue of homogeneity or independence. Many thought it was independence (and with good reason) because we collected the data all at once. But the exercise of thinking about how the game was played (or how I had them play the game – 10 games at a time doing NG, NR, VG, VR) had them thinking and discussing. They did a good job assessing whether their results were truly random using the Goodness of Fit Test. They seem to understand quickly that the GOF test was appropriate and that the expected counts would 1/3 of total count for W,T, L. It was interesting discussing whether they should use the Novice, Expert or both. We also taking about whether we could add the Novice and Expert data together.

I also plan to use this activity in the future. I like it’s multiple uses and it definitely generates interest. I think next year, I’ll have them play the game over again for each activity. My students have a unit test tomorrow and a number of them were using the worksheet and discussing Chi Square and the issues. Always a good sign. Thanks for leading the way with these activities and using the NYT rock, paper, scissors!

Doug
FYI my email is paged@galileoweb.org

There is a Radiolab episode about a variation with rock paper scissors well. Well swallows rocks and scissors but paper covers well. It can be heard here http://www.radiolab.org/story/91911-are-we-coins/
I have my AP Stats cherubs listen to this each year

[…] So, I put out a twitter call for help and Bob Lochel (@bobloch) chimed in and directed me to a super helpful post over on his blog. I had seen the cool applet for playing Rock, Paper, Scissors over at the New York […]

[…] Bob Lochel’s post Rock-Paper-Scissors and Two-Way Tables.  And found his second post, Chi-Square Tests: Rock Paper Scissors.   I liked the idea, but the gold came in the response sections of both posts.  Doug Page […]

[…] out the blog post Chi-Squared: Rock, Paper, Scissors for an AP Statistics class. It uses this You VS the Computer applet from the NY Times to collect […]