If you are a loyal followed of the blog (and I know you are!), you’ll notice there was no class opener this past Friday.  This is because I was not in school, and instead traveled about an hour north of my home to New Brunswick, NJ. for the Association of Math Teachers of New Jersey annual conference. I facilitated a fun hour of tech tools for math class (Padlet, Poll Everywhere, Answer Garden, etc…) and couldn’t help myself but to unveil Desmos regressions to an appreciative group of Desmos lovers.

But the highlight of the day was my participation in an Ignite session, hosted by my friends at the Drexel Math Forum. 10 speakers each had 5 minutes to get their ideas across through 20 slides which changed every 15 seconds. It’s a fun an intimidating concept!  Some of those who shared during the Ignite were Max and Annie from the Math Forum, Phil Daro, past NCTM President Jim Rubillo….and me?  How the hell did I get invited to present with a group of people I admire so much?  I think my topic, language in math class (based on a past blog post on math phrases I’d like to see expunged) went over well, and I look forward to sharing the video when it becomes available.  It’s probably the most thrilling experience I’ve had as a speaker.

But the fun math times continued after the Ignite session, when Jim Rubillo and I shared a conversation about the exciting role of technology in math class, and its ability to allow students to investigate ideas efficiently.  It turns out that Jim lives about 10 minutes from me (small world) and he shared a math idea from his (I think) college math course where students used technology to pursue an idea.

This particular investigation involves the Harmonic Series, which I have shared with my freshmen classes recently:

This series diverges, heading off towards infinity – though quite slowly, and Jim’s students investigated when the series passed integer values. How many terms does it take for the series to go above 3, or 4, or 5, etc?  Some examples: 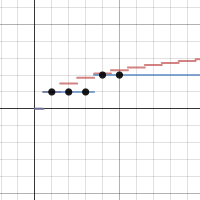 Technology was uber-useful here, as a Desmos graph (click the picture to the right to explore) allowed me to observe the sum, and use a Floor function to watch when the next integer value is reached.  A table was also useful to verify the changes in sum.

This was all done after I went home that day, and it was Jim’s next challenge when had me intrigued:

If you look at the n’s where the sum reaches a new integer value, and find the ratio of these consecutive n’s, you’ll never guess what the ratio approaches.

Well, in math, there are lots of surprising results, and many of them seem to involve a few “usual suspects”.  I really had no idea what those number might approach – but I had a good guess: “I bet it’s e”.

Some quick calculations involving these landmark n’s seem to lend some evidence towards Jim’s claim.  It’s an idea he said he had never seen before, and I don’t recall encountering it.  But Jim did find some documentation regarding a proof, but couldn’t recall where it was located.  If anyone out there has more info to share, please contribute in the comments!

In the end, Friday was just an awesome day of sharing, and fun to talk one-on-one with some legends in the math education community.

Oops; (n+1)/n should not have appeared above.

thanks so much for the share! As primarily a stats person, the calc of this goes beyond anything I have thought about for a long time.

[…] bound to have a neat problem for me to chew on.  The last time, he shared a fun task involving the harmonic series. Take a few minutes and think about this Pascal’s Triangle scenario…I’ll even […]