Today’s opener turned into much, much more than I originally expected – and a truly powerful share at the end. 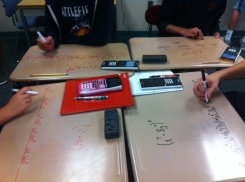 For the last few days, my students have been working through the binomial theorem, expanding and finding specific terms. There has been much movement around class, with students at the board, working together, sharing ideas. I provide problems off the top of my head, giving more difficult ones if the students seem ready, and peeling back if we need more practice.  To provide solutions, I use WolframAlpha to expand the binomial and project solutions from my iPad. This has worked well, but students have also taken note of the deeper info Wolfram provides in these calculations.  In today’s opener, one of these interesting graphs appeared on screen as students enetered: 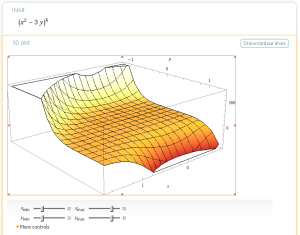 The Wolfram player allowed students to move around this strange object and explore it from all angles. One of my classes impressed me by relating what they related the picture to the Continental Shelf, which they were exploring in science. I provided a 2-minute intro to the (x,y,z) plane – always a fun time.

It was then that one of my students who participates in robotics shared his experience with a 3D printer this summer. I was surprised that few students had heard of these devices, and they seemed intrigued by the idea.  I was reminded of a powerful video involving a student their age, whose father “printed” a prosthetic hand for his son. The end of class then featured two videos I dug up and shared in the last few minutes of class to make students aware of the engineering possibilities.

When the kids leave with a “wow” moment, something has gone right!

You’re either a genius, or the biggest idiot here.

It’s the first year of Keystone testing here in Pennsylvania, and everyone is adjusting to the fun changes.  And by fun, I mean time-consuming,  nightmarish organizational hoops to jump through provided by our wonderful state government.  This year, many of our 8th graders get zapped with the testing equivalent of Haley’s Comet: state grade-level testing, along with grade-level tests in writing and science….followed by the cherry on the sundae, this week’s Keystone Exam in Algebra 1.  It’s a shock they ever have time to actually, you know….learn stuff.  Hoping our kids don’t suffer too much bubbling withdrawal at the end of this week.

We have about 400 8th graders here, and many of them will take the Algebra 1 test this week.  Some, around 80, took algebra 1 as 7th graders and have already passed the Keystone.  Meanwhile, 40 or so are in a pre-algebra course and will take the Keystone next year as 9th graders.  So, what to do with 120 students, while their grade-level friends endure a state test.  For two days, and 4 hours, I have been given carte-blanhce, an emtpy slate, to keep 120 8th graders entertained.  And money!  Well, some money anyway.  What would you do?

Tomorrow morning, 120 8th graders will meet with me in the auditorium to learn their fate.  I have split the kids into 26 groups of 4 or 5 and gathered supplies for a popsicle-stick bridge-building contest.  The concept and many guidelines came from the site TryEngineering, which provides many neat and simple tasks for kids to encourage creativity and discovery.  I have worked with a colleague from our high school, who teaches an intro to engineering course, whose students found some great resources to share with the kids to get them excited about the project.  Two short and snappy videos they found from MIT feature simple bridge designs, with Lego-men being experimented upon:  Part 1 and Part 2.

The supplies are simple:  each group will receive 200 popsicle sticks, a glue gun, and glue sticks.  Teams will only receive the glue gun after they have drawn some sketches and discussed a plan for their design.  Most of today was spent organizing 26 boxes of sticks, and getting groups ready.  Groups will be graded on their design, how much load their bridge will hold, and how well they work together as a team.  And about those groups….all groups have a similar mix of “advanced” kids and “pre-algebra” kids, which I have assigned beforehand.  This mix led to the “genius or idiot” comment above from a colleague.  Yep, this could go badly.  But, it could go great!  Its too tempting to not try!

So, tomorrow we start building bridges.  My coach friend Gayle and I built a bridge on our own, which you see above, and we were quite proud of ourselves.  If time permits on Wednesday, we will test the strength of the bridges.  Our bridge snapped at 7000 grams.  But I am confident the kids will do a better job.

Looking forward to a fun, but chaotic, time the next 2 days!