We’re working through functions in my college-prep pre-calculus class; meaning a more rigorous treatment of domain, range, and composition  ideas than what students experienced in earlier courses. As I was about to start inverses last week, I sought an activity which would provide some discovery, some personalization, and less of me rambling on.

These are the times when searching the MTBoS (math-twitter-blog o’sphere) leads to some exciting leads, and the search for inverse functions ideas didn’t disappoint – leading me to Sam Shah’s blog, and an awesome discussion of inverse functions which I turned into a sharing activity. A great list of blogs and MTBoS folks appears on this Weebly site.

To start, I wrote a function on the board, and asked students to think about the sequence of steps needed to evaluate the function:

The class was easily able to generate, and agree upon a list of steps:

From here, I asked the class to divide into teams of 2. Each partnership was then given two functions on printed slips (shown below) to examine: list the steps of the function, and provide 3 ordered pairs which satisfy the function. 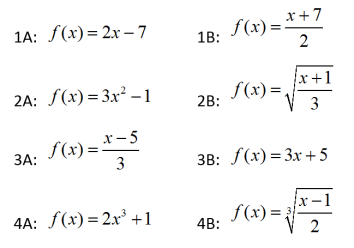 Notice that the functions are arranged so that A and B in each set are inverses.  Partners were given two different functions, but never an inverse pair. So a team could get 2A and 4B, but not 3A and 3B.

My plan was to complete this entire activity in one class period, BUT weather took hold. They day we started we had a two-hour delay, and the next two days were lost due to snow, then a weekend. SO, the best-laid intentions of activity, sharing and resolution became activity…..then 5 days later.

As we started the next class day, I asked students to review their given functions (and re-familiarize themselves), then seek out the teams who had the other half of the function pair and share information. So a team which had 2B sought out 2A, and so on.

After the sharing, a classwide discussion of the pairs was then seamless. Students clearly saw the relationships beteen the inverse pairs and the idea of “undoing” steps, and we could now apply formal definitions and procedures with an enhanced understanding. Also, by sharing ordered pairs, students saw the domain-range relationship between functions and their inverses, and this made graphing tasks much easier. I’m definitely doing this again!

Finally, notice that pair 2A / 2B features a quadratic / square root. While we didn’t dive right in at the time, this set the trap for a discussion of one-to-one fucntions and the horizontal line test the next day.

We’re finishing up our unit on function operations.  Yesterday we developed the definition of inverse functions (using only linear functions) and graphed to demonstrate the symmetry. Time to see what we have learned: 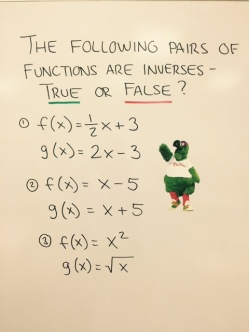 Many students’ instincts let them down on the first pair, believing them to be inverses. But after my prodding that they somehow verify the inverse relationship, we soon verified that f(g(x)) did not produce the result we desired.   The second example was then complete easily.

But what about that third problem?  They sure seem like inverses.  One student offered his proof for the pair:

They are inverses just because I know.

Sometimes ideas in math are just that obvious, and maybe we don’t need to prove them specifically.

On the board, we “proved” that both f(g(x)) and g(f(x)) both seem to simplify as x.  And a few numerical examples help show this:

Students in my class have not been exposed to a formal definition of the square root function, and this led to a nice discussion of absolute value, and the need to restrict the domain in order to consider inverses. Planting seeds for algebra 2, which many of my students will take next semester, is always a bonus.

After a weekend away from composite functions, today’s opener was designed to bring functions back into discussion, disguised as an innocent-looking shopping problem:

It’s the day of the big department store sale, and you have two coupons you have clipped from the newspaper.  One coupon takes $10 off the price of any item, while the other takes 30% off the price.  In what order should these discounts be taken for you to realize the maximum savings?

After a few minutes of table talk, just about all groups agreed that taking the 30% off first would seem an optimal strategy.  But when asked to provide justification, groups took much different paths.

Some felt choosing a dollar value would provide adequete justification: 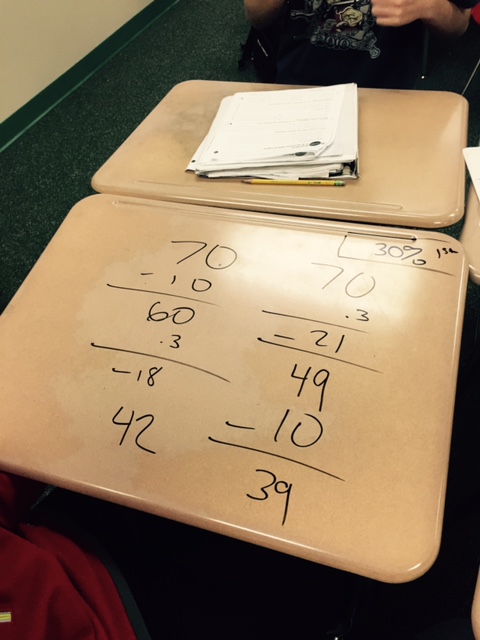 How many values are needed to convince ourselves that this strategy is optimal? Is it possible that one strategy is best for some prices, while the other is best for others?

Not very elegant…nor very convincing. But a ray of sunshine appears from the other side of the room, as a group considers defining functions to represent the discounts….but stops just short of pursuing them as a proof.

The eventual “proof” done via composite functions shows that not only is one method superior – it will always be superior by 3 dollars. Add in a domain restriction that our starting value must be at least 10 dollars, and we have successfully reviewed all of our scary function vocabulary.