This coming Tuesday, April 9, the fantastic online graphing calculator Desmos will be featured in a webinar held through the Global Math Department.  This is part of a weekly math conference series hosted by bigmarker.com.  Some weeks, there is a set theme, while other weeks teachers present their favorite lesson.  It’s exciting to hear some of the math teachers I have come to respect and admire through twitter and blogs share their favorite lessons, and you will always find something worth adapting for your classroom.  You can check out an archive of past webinars on the conference section of the Global Math Department on bigmarker.com.  I am looking forward to sharing my conic section lesson this week, and the agenda is packed with great ideas for Desmos, including:

Pop in and say hello, or come back later and enjoy the webinar archive.

Earlier this year, Desmos unleashed its table feature, and it is a seamless addition to an already simple tool.  You have choices for how to implement a table in a Desmos document.  Start a new table, and enter a rule in the “y” position.  Or take an existing function, and “edit” it to become a table.  Or, name your function as f(x) and Desmos will recognize it in a new table.  Here, a quadratic function was converted to a table, and a new column added to compute values of the derivative.

Think about the conversations you can with your class about this.  How do the values of the rule “2x+4” relate to the graph of the quadraic function?  When does 2x+4 take on positive / negative value?  When is it zero?

Play with the Desmos graph by clicking on the link, and enjoy the table feature. 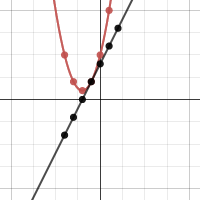 Sometimes it’s the simplest idea that produces the biggest wow moments, and the Daily Desmos site earns my kudos for not only its simple, powerful concept, but also its potential for differentiation.  Each day, 2 new graphs generated on Desmos are given.  It is up to you, or your students to determine how the graph was made.  How was this graph made? 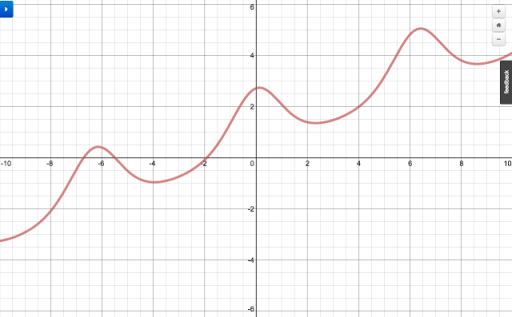 Many of us teach high schoolers how to graph trig functions, and our students certainly know linear functions.  So, how to combine them?

The site also challenges users to contribute their own graphs and provides guidelines for basic and advanced graphs.  What a fantastic tool for differentiation:  allow you quick finishers to pursue a Desmos graph, and show off their ideas to the world.  Print out the graphs, post them around your room, and let math go beyond the mundane and routine.  When you have your first conversation about polar coordinates and functions with your class, when you weren;t planning to have it, you’ll know you are doing something right for your kids!  Thanks to Michael Fenton for starting the Daily Desmos.  Keep up the great work!

I’m a relatively new iPad user…just scratching the surface of the neat stuff out there, sometimes thinking how cool it would be to be back in the classroom with these tools, sometimes doing the slow burn when I see great tools go un-used. Every now and then I run into an app which has me running to my colleagues like a giddy schoolboy…such as today when a friend tweeted about the MyScript Calculator.

There’s really not much to this app:  you write a math calculation on the screen, and the app recognizes your handwriting, and performs the calculation.  It doesn’t solve equations, it doesn’t factor…it just calculates.   Check out my hairy knuckles as I take it for a test-drive.  Also, note that I understand that there are a number of goofy ways to record an iPad screen…I’m a newbie….baby steps….

It works for iPhone as well.  Take this app around your school, show it off to teachers, and enjoy the reactions and conversations.  Is this the end of the world?  Will we have a generation of kids who can’t make change for a 5?  Hey, it’s just a calculator…a pretty cool one.

So, how do we adapt math instruction in a world where computations are at our fingertips?  Ask better questions!

I first heard about the QAMA calculator a few weeks ago, and was immediately intrigued.  The QAMA website advertises its device as

The revolutionary calculator that shows the answer only when you also enter a suitable mental estimate.

That’s a good enough hook for me, so 5 devices were ordered, and I had the first chance to work with a group of students using the QAMA calc.  Students in a 7th grade class rotated through learning stations, where working with me on “percentage of a number” problems were a station challenge.

To start, I had students enter the problem 2.8 x 4.9.  Pressing the equals key, students were not given the answer, and instead must give an estimate of the answer.  An answer deemed “reasonable” will then produce the actual answer.  Here, the students agreed that 3 x 5 = 15 would be a reasonable estimate.

From this introduction, we dove into the first percent problem:  what is 78% of 210.  After writing the problem as a decimal multiplication problem, we brainstormed estimation ideas:  75% is close to 78%, and 200 is pretty close to 210 as well.  This led to discussion on parts of 200:  what is 25%, what is half, how much is 75%.  An estimate of 150 was deemed close enough, and the students were hooked.  Students worked at their own pace through the problems, and were excited when their estimate was considered close enough.

One of the trickier problems, and one which caused the most discussion, was 8% of 45.  After agreeing that .08, rather than .80, was needed here, honing in on an estimate was a tough ride.  Can we find 10% of 45?  How much less do we need to shave off?  The calculator apparently adjusts its tolerance based on the sophistication of the problem, so some close answers were not allowed.

This problem also yielded the strangest accepted estimate of the day:

If anyone can figure out the logic here, I’d be interested to hear it.  Insight into the complexity of the estimation algorithm can be found on the company’s website.  EDIT:  as the folks at QAMA explained to me, the calculator will simply give you the correct answer after 5 incorrect guesses.  This particular student was all over the map with his guesses, so I would not be surprised if this photo represents his 5th guess.

Also, one feature I like is that you can shut off the estimation feature, but the calculator has flashing red lights to let the teacher know the feature was disabled.  Pretty sneaky!

But, this was a fruitful activity, which allowed students to communicate their number sense, and verify their estimates.  Looking forward to hearing more stories of the QAMA calculator.